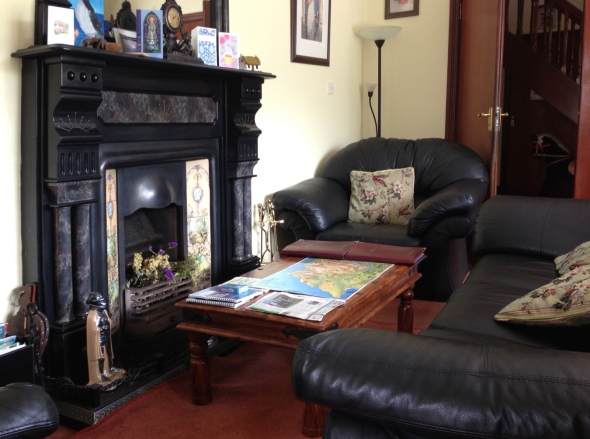 Today I did my work in Meadowfield’s sitting room for Breada’s 90 year old mother, Mary Keane hosted a luncheon for her friends in Meadowfield’s dinning room. Instead of working in messy charcoal and watercolor I worked on my landscape studies using my iPad with the app ‘Procreate’.

The sitting room has a nice study table near the windows and two book shelves with many books I utilize for reference and inspiration.

Table by the window and books. what more do I need? 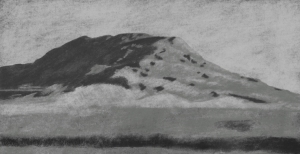 I worked on the ‘Procreate’ study to the left until Breada’s mother, Mary Keane arrived -then moved my things to my room and went to the village to do some shopping and find something for lunch. When shopping I found a new book of John O’Donohue’s work. The book was put together by Ireland’s John Quinn a former RTE radio broadcaster who worked with O’Donohue on a variety of radio programs. This book is a documentation of O’Donohue’s radio program articulations.

I spent a good part of the day reading the book. To my surprise he wrote a lot about the landscape of Connemara, particularly about the mountains:

“I often feel that there is a world, maybe an infinite world of dream, hidden at the heart of a mountain, and that maybe part of the duty of the artist is in a certain sense to excavate the secret world of the mountain in an imaginary way. If you do agree that landscape is alive and that it is a presence, maybe then it is in the shape of landscape, the form of mountains, that you actually get an expression of the state of the place.”

When I returned to Meadowfield from my shopping and lunch I visited with Breada’s mother, Mary Keane and her friend Biddy for an hour or two. The conversation ended with me promising that I would visit her at her home up on Cappanawalla Mt. when I returned from Connemara in a week’s time.

After the visit I continued with my iPad work until 7:00 then took my book down by the sea to Monk’s to have my dinner. I was, again seated at a table with a nice view of the sea. After dinner I took some photos in the evening light before walking back to Meadowfield.